MOUNT TEIDE has been selected by the European Space Agency as the location to test a laser, being fired at space debris from old rockets and satellites, left in the Earth’s orbit.

The junk is considered capable of causing damage to satellites, as well as to the International Space Station, and the ESA says the problem is increasing, with collisions becoming impossible to prevent, or even to attempt to control.

The laser is housed in the Observatory at Izaña, in a building in The Optical Ground Station (OGS).

The OGS, installed in the Teide observatory, 2,400 meters above sea level, was built as part of the European Space Agency’s (ESA) long-term efforts for research in the field of inter-satellite, optical communications.

The original purpose of the station, equipped with a telescope (1m aperture), was to perform the in-orbit test of laser telecommunications terminals, onboard satellites in Low Earth Orbit and Geostationary Orbit.

Also, around one-third of the observing time is used for basic, astronomical research from ESA and IAC science teams, with dedicated instruments, either in the coudé or in the Ritchey-Chretien foci.

The Optical Ground Station was inaugurated in 1995. The Instituto de Astrofísica de Canarias, which took part in the integration of the station instruments, has since been in charge of the station operation.

Since January 2001, ESA-ESOC has been carrying out periodic survey campaigns of the space debris in GEO and GTO.

This is ESA’s contribution to the worldwide, common efforts for this task, with NASA and NASDA (National Aerospace and Defence Agency of Japan).

The ESA, preparing a laser telescope to track space junk, is planning to fire it at the debris considered most likely to foster problems, causing it to begin a descent through the atmosphere, where it will burn up and disintegrate.

Rafael Rebolo, director of the Canarian Astrophysics Institute, which incorporates the ESA facility within the Observatory, said: “The new telescope is a prototype experiment to test that the laser can achieve linear communication with a relatively small piece of rubbish (under 10cm), and get it to move and be pulverized in the atmosphere.”

Rebolo hopes the facility will be operational within four years, serving as a basis for other lasers to be used, consistently, to clear the areas most populated by space junk.
Canarian Weekly

If you’d like to find out more about living in Tenerife and buying a property on the island, Tenerife Sun Properties will be happy to help. 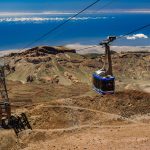 6 fabulous things to do in Tenerife